Schedule for the introduction of the Union Customs Code

The Union Customs Code is being introduced in stages over a transition period. You can follow the work on this page. Swedish Customs’ national schedule will be updated as work progresses, and we will be publishing dates of relevance for the introduction of, and migration to, new systems.

In early October 2022, the European Commission published proposals to extend the deadlines for introducing some of the systems which, according to the relevant legislation, were due to be launched on 31 December 2022 and in spring 2023 respectively. This affects presentation notification of modes of transportation, presentation notification of goods, temporary storage and national customs declaration systems and phase 2 of the import control system.

The proposals are directed to Member States that have applied for exceptions. In some cases, the proposals are linked to conditions that must be met by both customs authorities and businesses. There are currently ongoing discussions around these proposals at the EU level and a decision is expected in December.

The proposals will affect the national schedule for the implementation of the national system for standard customs declaration for imports. The deadline for businesses to implement the standard customs declaration for imports, including special procedures and special tax areas, have been extended to 31 December 2023, according to the proposal from the European Commission. Sweden has applied for an exception, and once the decision has been made at the EU level, we will amend the national plan in accordance with the deadline in that decision.

We recommend that you follow the plans you have already made for implementing the system for standard customs declaration.

Schedule for the standard customs declaration for special procedures and special tax areas. Please click on the image to enlarge.

Consignments worth less than €150 may be declared using a low-value declaration. This declaration type will be launched in April 2023.

Schedule - Customs declaration for gifts and low-value consignments. Click on the image to enlarge. 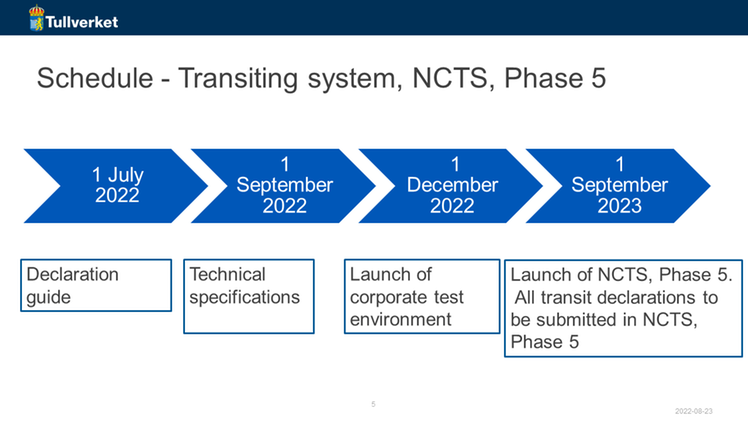 This system will be introduced on 1 March 2023 and all affected actors should submit information in the new system by 2 October 2023. 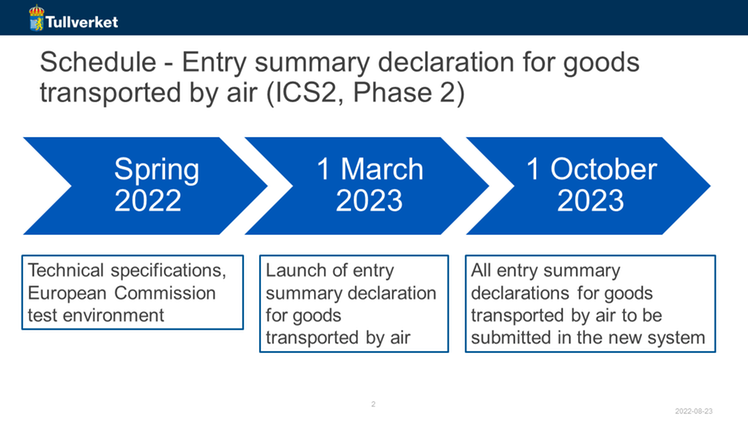 From 1 March 2023, presentation notifications of goods transported by air should be submitted with reference to the entry summary declaration. This will bring a change in procedures and new information requirements for the aviation industry. 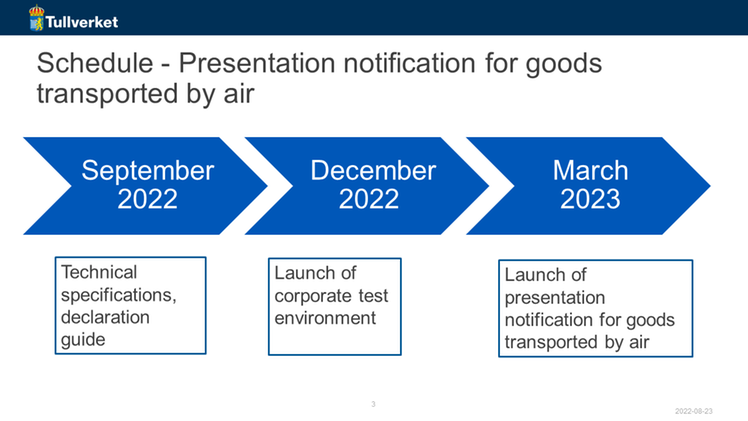 Schedule - Presentation notification for goods transported by air. Click on the image to enlarge.

Presentation notification for goods transported by other modes of transportation

From 1 March 2024, presentation notifications of goods transported by other modes of transportation should be submitted with reference to the entry summary declaration, with the exception of goods arriving by road from Norway. This will bring a change in procedures and new information requirements for actors submitting information.

Under development. The new export system is schedule for launch in Q4 2024. More details will follow. 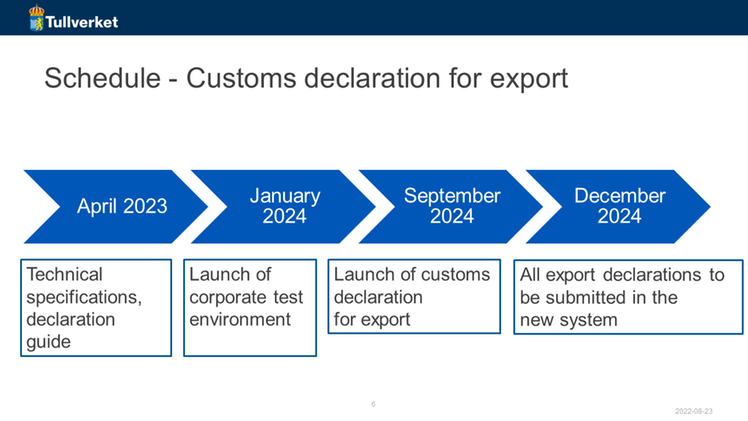 Schedule - Customs declaration for export. Click on the image to enlarge.

Simplified declaration and entry in the declarant's records

The transition to simplified declarations and entries in the declarant's records for imports is planned for 2024.

One of the more significant changes is that 10-digit commodity codes will be required in the simplified declaration.

In the time until the transition has been completed, you may keep using the current regulations and data provision, as you do today.

Proof of Union Status (PoUS) will be introduced in two phases, where T2L/F will first be digitalised with a planned launch in Q1 2024. Phase 2, which includes customs manifests, will be launched together with EMSW in Q3 2025.

The launch is scheduled for Q3 2025. The EMSW will then replace the Maritime Single Window, the current system.

Certex is a system for exchanging information about certificates and authorisations needed for import and export, which are issued by authorities other than customs authorities.

The electronic transport document allows goods to be transited via the digital systems used by the economic actors. It may be used for transport by sea and air, and is scheduled to be introduced in 2025.

Our system for customs warehouses, implemented in 2016, needs to be upgraded to comply with the Union Customs Code. This work is scheduled for 2024.

They will consist of a central system with a central interface for traders to manage applications, but also central functions to manage and store these cases.

A database for digital proof of origin (e-PoC) is also planned, where proofs of origin can be stored centrally, where they are accessible to customs authorities.

Swedish Customs’ Implementation Schedule indicates at what point in time different systems are developed. At the end of the arrows, economic operators should have submitted all required information, in accordance with the new legislation and in the new or upgraded systems. 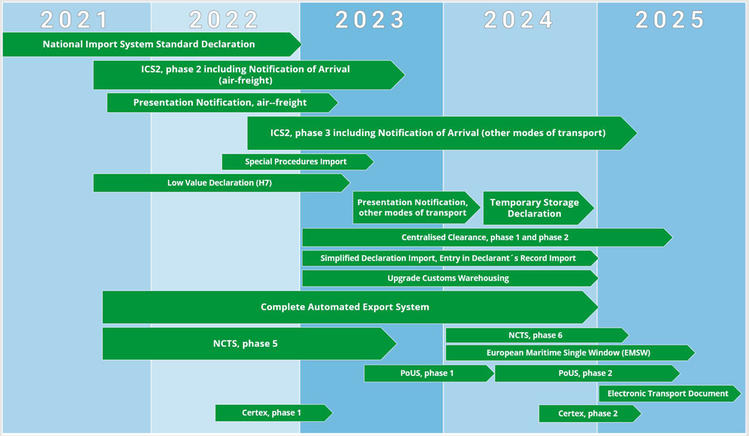 Swedish Customs' Implementation Schedule. Click on the image to enlarge.

What is updated: Teknisk ändring

How can we improve this page?
Print